The field of statistics and probability theory was born around 1654, in a famous correspondence between Blaise Pascal and Pierre de Fermat. These two French mathematicians concerned themselves with a problem in gambling: suppose two players A and B are engaged in a match – for concreteness, suppose they are repeatedly tossing a fair coin. Whenever the coin lands heads, A wins a point; whenever it lands tails, B wins a point. It is agreed that the first player to reach six points wins the match and receives a stake of $100. Suppose the score is 5-3 in favor of A when the match is interrupted. What is a fair division of the stake?

This “problem of points” had been considered previously, but no satisfactory answer had been reached. Here we will go straight to the solution and not concern ourselves with the history of the problem (an excellent reference is Edwards, 1987/2019; the Wikipedia entry is here). The key idea is that the stake should be divided according to the probability of winning the match. For our present scenario, the solution is simple: the only way in which B can win is when the coin lands tails on three consecutive tosses. This probability is ½ * ½ * ½ = ⅛, so B should receive 100 * ⅛ = $12.5 and A should receive 100 * ⅞ = $87.5.

The problem of points becomes more complicated when there are several ways for B to win. For instance, the score could be 4-3 rather than 5-3. Now B wins in the following sequences of outcomes (H for heads, T for tails):

Enumerating the winning sequences like this is tedious, and Pascal invented his famous “triangle” to facilitate the computation. A discussion of the triangle will lead us to far afield, and here we will focus on a different method to obtain the solution: JASP.

In JASP, click the blue plus-sign on the top right of the screen and activate the “Learn Bayes” module from the module list (red marker in the screenshot). The module icon should now be available on the ribbon (blue marker). 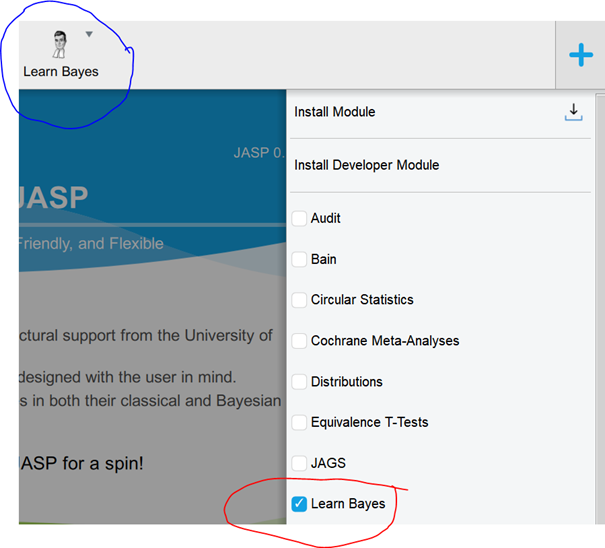 Now click the “Learn Bayes” module icon on the ribbon and navigate to the “Problem of Points -> Game of Chance” section: 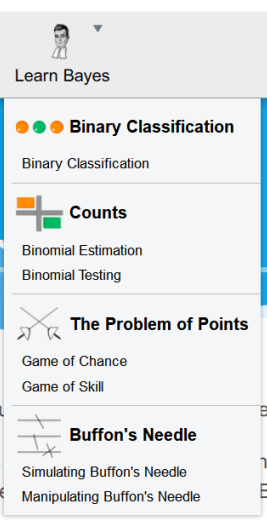 Inside the “Game of Chance” section, you can change the default setting to create a 4-3 score with a race to 6: 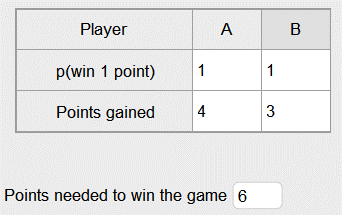 Note that the “p(win 1 point)” is a *unnormalized* probability – the normalized probabilities are obtained by dividing by the row sum. This makes it easier to specify probabilities with more than two players.

The JASP output confirms out result above, presenting both the analytical result and a simulation in which the match is played many times: 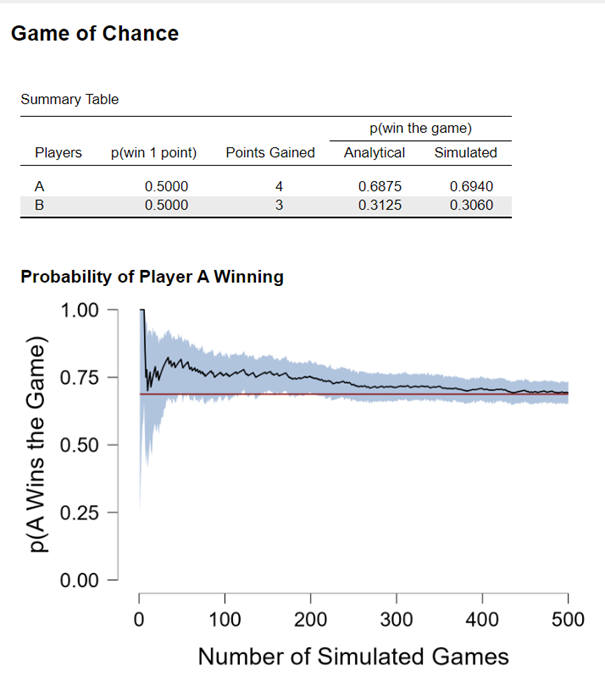 Before proceeding, here is a question to test your intuition. Suppose you are offered a game in which winning a point is decided by the outcome of a fair die: if it lands five or six, you win a point; if it lands on any other number, your opponent wins a point. In other words, your probability of winning a point is ⅓. In order to make the game fair you demand a head start in the number of points. What head start would make the game fair:

The answer is given at the end of this post, following the references.

The Game of Skill

So far we have considered a simple game, where the uncertainty about the outcome is fully “aleatory”, that is, given by sampling variability. However, now consider a scenario in which the points are earned in a game of skill, and the players need not be equally skilled. For instance, consider again the scenario in which the score is 5-3 in favor of A, but now points are earned by winning a game of pool. The fact that the score is 5-3 suggests that A is the better pool player, so more likely to win than if it were a game of chance; consequently, the fair share of the stake for B should be lower. From a Bayesian perspective, the lack of knowledge concerning the relative skill of the players is usually expressed as a beta distribution. In other words, the game of skill features not only aleatory uncertainty, but also epistemic uncertainty. The solution to this problem was obtained by Pierre-Simon Laplace when he was 25 years old (p. 369 in Laplace, 1774/1986).

Instead of working with the derivations we can rely once more on JASP. We select the “Game of Skill”, and set up the problem as follows: 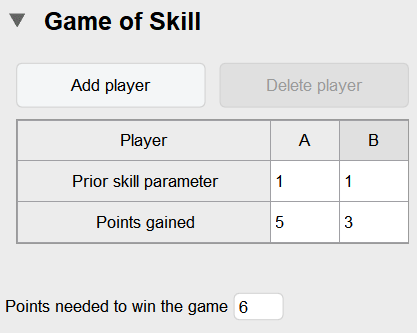 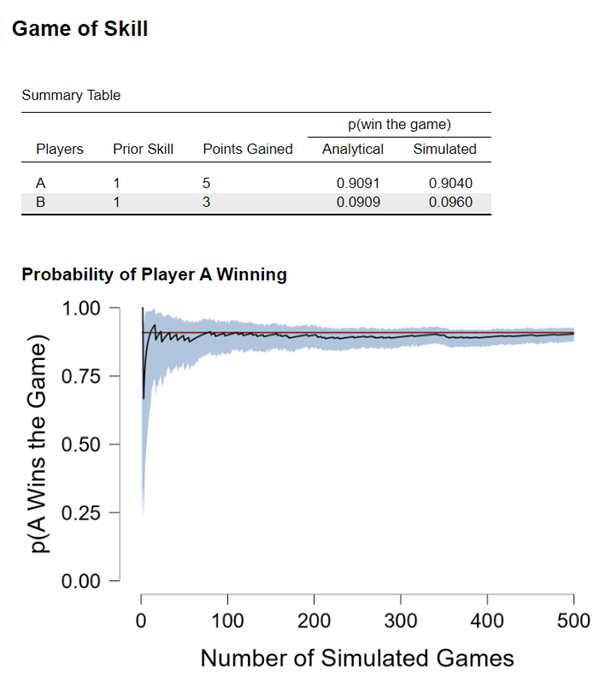 In the game of chance, the probability of B coming back to win was ⅛, for a fair portion of the stake of $12.50. In the game of skill, such a comeback is less likely – the probability of B winning is 0.0909 (the derivations give it exactly, as 1/11), and hence the fair portion of the stake that should go to player B is $9.09. Interestingly, adding the epistemic uncertainty reduced the uncertainty about which player would have won the match had it been played to its conclusion.

Answer to the Question

Above we asked about the head start needed to create a fair game when your chance of winning a point is ⅓. The answer:

Jiashun Wang is a PhD student at the LMU Munich. His research interests lie in using computational models to understand decision making. He has implemented the problem of points and Buffon's needle problem for JASP.

Using JASP to Adjust for Publication Bias with PET-PEESE

December 07 - 2021
Source: shutterstock.com/szczygiel The analyses in this blog post are based on an example from Bartoš et al. (2021). Publication bias…
JASPVersion: 0.16.4