Researchers often have questions about inter-relationships between observed variables (indicators) and latent variables (factors). The Multiple Indicators and Multiple Causes (MIMIC) model is one of the models to quench the thirst for such questions! The latest JASP release provides MIMIC models as part of the SEM module. This tutorial introduces the idea of MIMIC models and, with a simple example, explains how to fit and interpret them.

MIMIC models are used when researchers are interested in (1) identifying factors that are measured by multiple indicators and (2) examining predictors that cause those factors. In “MIMIC”,“MI” stands for “multiple indicators”. These multiple indicators measure a latent variable of interest. “MIC”, on the other hand, means “multiple causes”. These causes refer to observed variables that are assumed to predict the latent variable. For a more concrete understanding, consider the example below (see Hodge & Treiman, 1968 for more information about the sample and the research context; see Schumacker & Lomax, 2016; Jöreskog & Sörbom, 1996 for a detailed explanation about the MIMIC model applied in the social participation data).
In our social participation example, researchers are interested in investigating the effects of income, occupation (occup), and education (educ) in predicting social participation. Here, social participation cannot be measured directly. It is therefore operationalized as a latent variable measured by the number of church attendances (church), the number of voluntary organization memberships (member), and the number of friends seen (friends). Three variables, church, member, and friends, are (multiple) indicators of social participation (the “MI” part of of “MIMIC”). The other three variables, income, occup, and educ, are causes of social participation (“MIC”). We provide a dataset that was simulated based on Hodge and Treiman (1968). You can download the simulated dataset here.
Once you load the dataset into JASP, the spreadsheet looks like below. Note that the dataset was simulated based on a sample correlation matrix. Because of this, there are some seemingly nonsensical values (e.g. -0.026 number of friends seen) that can be safely ignored.

To proceed with the MIMIC model to analyze the data, open the MIMIC analysis under SEM > MIMIC. Then, drag the variables church, member, and friends to the Indicators section and income, occup, and educ to the Predictors section. 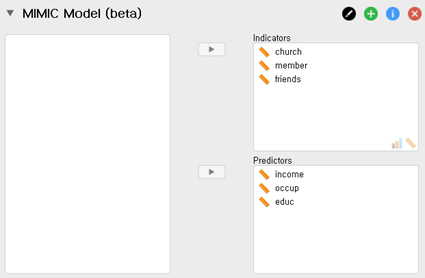 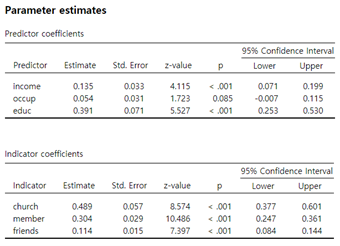 The two tables under Parameter estimates present the standardized estimates. We interpret the All column under Standardized. 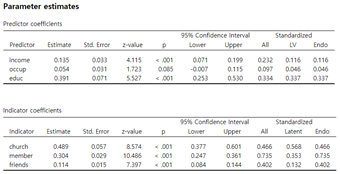 In the chi-square test of model fit, we reject our fitted model in favor of the saturated model if the p-value is lower than 0.05. According to the table of Chi Square test, the p-value of the Factor model is not significant although the p-value is slightly over 0.05. Therefore, we can say the model fits the data. It is common to supplement the chi-square test with other fit indices to assess overall model fit. To let JASP give various fit measures to us, check Additional fit measures under the Options tab. 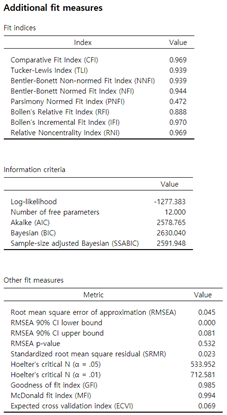 Among various fit measures, we consider the Comparative Fit Index (CFI) and Tucker-Lewis Index (TLI) in the table of Fit indices and Root mean square error of approximation (RMSEA) and Standardized root mean square residual (SRMR) in the table of Other fit measures. The respective values of CFI and TLI are 0.969 and 0.939. These values are greater than 0.90, which indicates an appropriate model fit. For RMSEA and SRMR, the values are 0.045 and 0.023, respectively. Because the value of RMSEA is lower than 0.05 and that of SRMR is lower than 0.08, our model has a good fit to the data.
Last but not least, it would be great if we can plot a path diagram to inspect the estimates among variables visually. JASP allows you to easily do this! In the control panel, open the Plots tab, and check the Parameter estimates and Legend. The path plot will appear in the output panel. 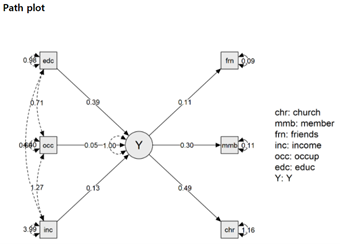 In this tutorial, we have introduced the MIMIC model, ways to implement it, and how to interpret the results. Cannot wait to apply MIMIC models to your substantive research questions? Download JASP now to MIMIC!

Ihnwhi is a PhD candidate at UC Merced.

Michael is a Research Master student in Methodology and Statistics at Utrecht University.