This post demonstrates the Equivalence Testing Module, new in JASP 0.12. In traditional hypothesis testing, both frequentist and Bayesian, the null hypothesis is often specified as a point (i.e., there is no effect whatsoever in the population). Consequently, in very large samples, small but practically meaningless deviations from the point-null will lead to its rejection. In order to take into account the possibility that the null hypothesis may hold only approximately, “equivalence testing” involves the specification of an interval around the point-null. This interval contains all values that the researcher deems “too small to be meaningfully different from 0” (Morey, & Rouder, 2011, p. 407).

For this demonstration, we use the “implicit stereotyping” data set from Moon and Roeder (2014).1 The study tests the theory that implicit activation of a social identity can either facilitate or worsen performance on a task, depending upon the stereotype associated with the identity. The study by Moon and Roeder is a replication of Shih, Pittinsky, and Ambady (1999). The original authors hypothesized that Asian-American women perform better on a math test than a control group when they are primed with their Asian identity. The data from Moon and Roeder contain 53 women in the Asian-primed group and 48 in the control group (condition is coded as identity_salience). The dependent variable is accuracy (i.e., the number of items a participant answered correctly divided by the total number of items on a math test). To follow along, you can download the annotated JASP file. Below we first discuss the frequentist equivalence test and then turn to the Bayesian equivalence test.

≤ L, and one test to examine whether the effect size is bigger than or equal to the upper bound,

≥ U. Only if both hypotheses are rejected, we can reject the hypothesis of non-equivalence (i.e., that the conditions are practically different from each other). This procedure yields the same results as checking if the 90% two-sided confidence interval (for an

of 0.05) falls entirely within the set equivalence region. This visual check can be performed in JASP by selecting the “equivalence bounds plot” under “Additional Statistics”.

Let’s take a look at the output for the Moon and Roeder data:

From the equivalence independent samples t-test table we can see that both the lower bound test (t(99) = -0.826, p = 0.795) and the upper bound test (t(99) = -1.328, p = 0.094) yield a non-significant result. The equivalence bounds plot in Figure 1 confirms that the 90% confidence interval exceeds both the lower and the upper equivalence bound. Thus, we are not entitled to reject non-equivalence, that is, we have to remain open to the possibility that there is a meaningful difference between the control group and the Asian-primed group. However, as the classical two-sided t-test is non-significant, we also cannot reject the null hypothesis that the groups are equal. Therefore, we have to state that there is insufficient data to draw strong conclusions. 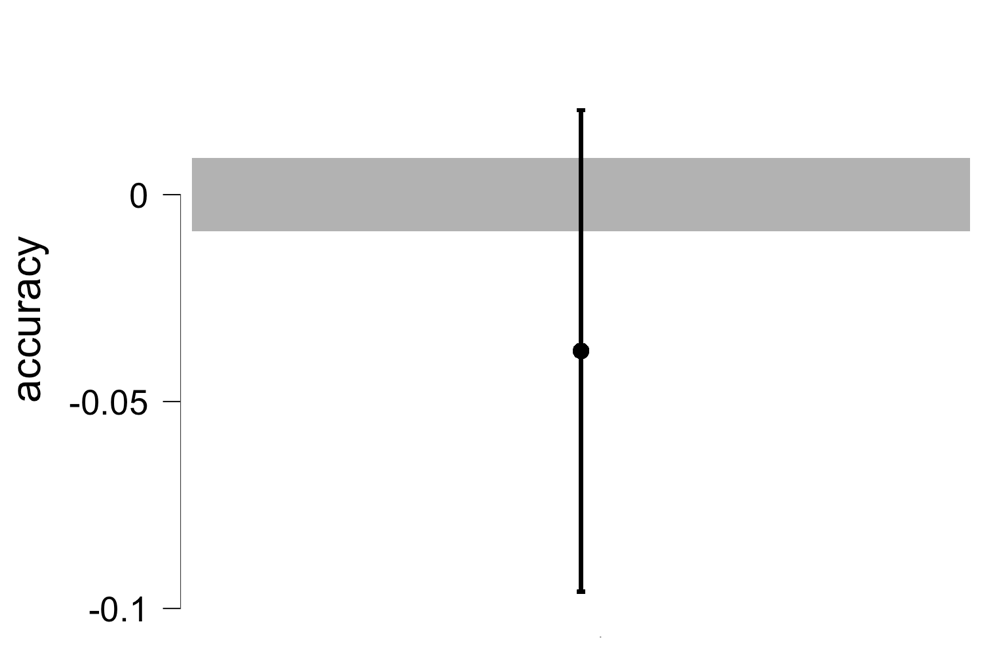 Figure 1. The equivalence bounds plot displays the 90% confidence interval of the mean difference in accuracy between the Asian-primed group and the control group. The user-defined equivalence region is displayed as a grey area. The mean difference in accuracy is -0.037. As positive scores indicate that the Asian-primed condition performs better and negative scores mean that the control condition performs better, these results are inconsistent with the stereotyping hypothesis.

Now we perform the Bayesian version of the equivalence independent samples t-test. The left panel of Figure 2 shows the JASP input options that we specified for this analysis. 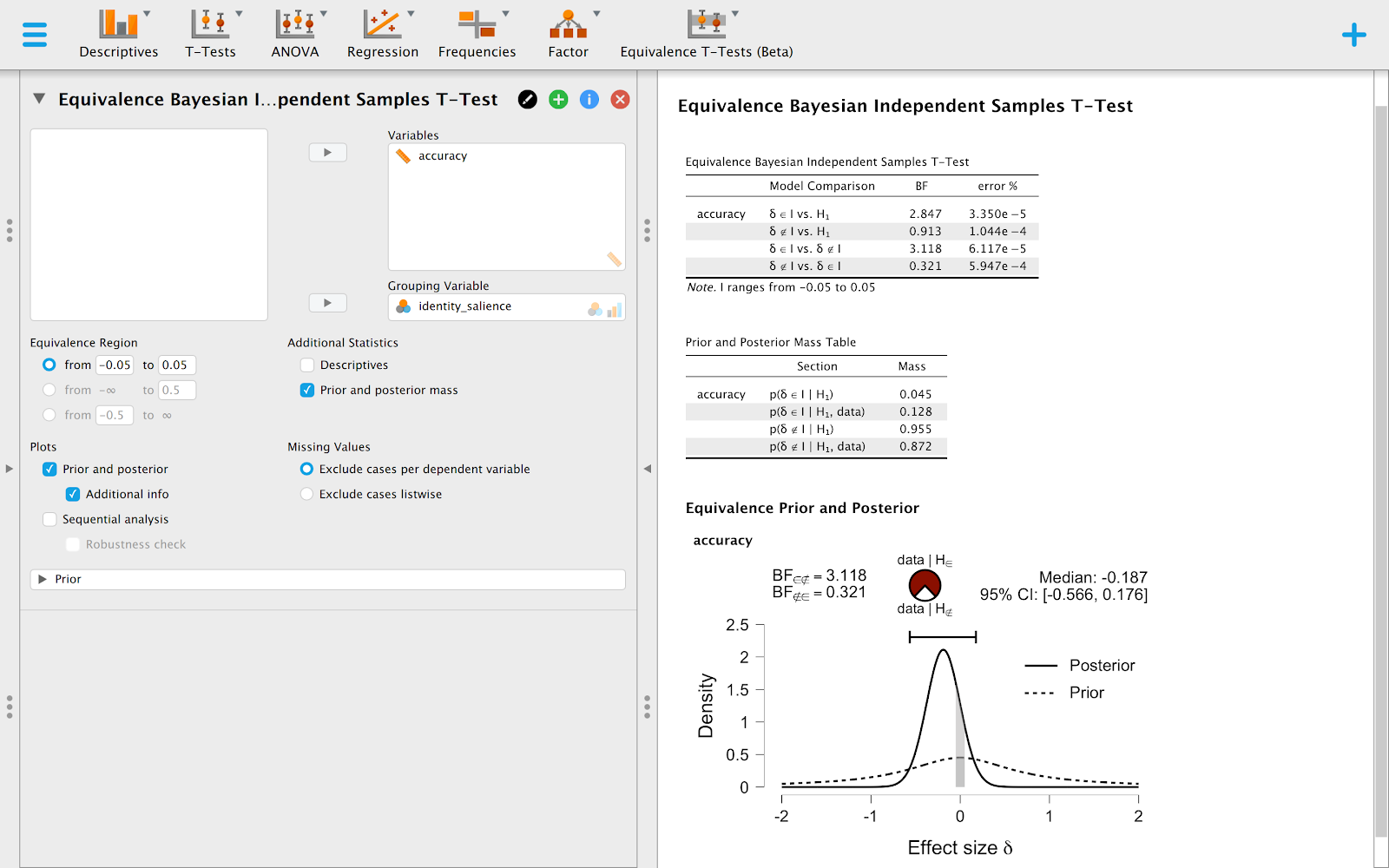 In the right panel of Figure 2, the first table presents the default output and shows four Bayes factors, one per row, quantifying evidence for and against several hypotheses. These hypotheses are schematically represented in Figure 3.

is defined by an unrestricted prior distribution for effect size. A restricted version of

can be obtained by bounding effect size so that it either falls inside an equivalence interval I (top model,

) or outside that interval (right model,

concern overlapping hypotheses, whereas the comparison between

, equals the posterior mass divided by the prior mass inside the equivalence interval:

Note that due to rounding errors, the calculated Bayes factor is slightly off from the true Bayes factor of 2.847.2 The OH Bayes factor quantifying evidence that the parameter lies outside the interval,

, can be reproduced in the same manner, but now by dividing the posterior by the prior mass outside the interval:

, is calculated by dividing the

The Bayes factor favoring the hypothesis that the parameter lies outside the interval,

In the left panel of Figure 2, you can see that the “Prior and posterior” is selected, which produces Figure 4. This figure confirms that the mass inside the interval (displayed as the grey area) is larger under the posterior distribution than it is under the prior distribution. Thus, as the Bayes factors already indicated, there is some (weak) evidence that the difference between the Asian-primed group and the control group is practically negligible. 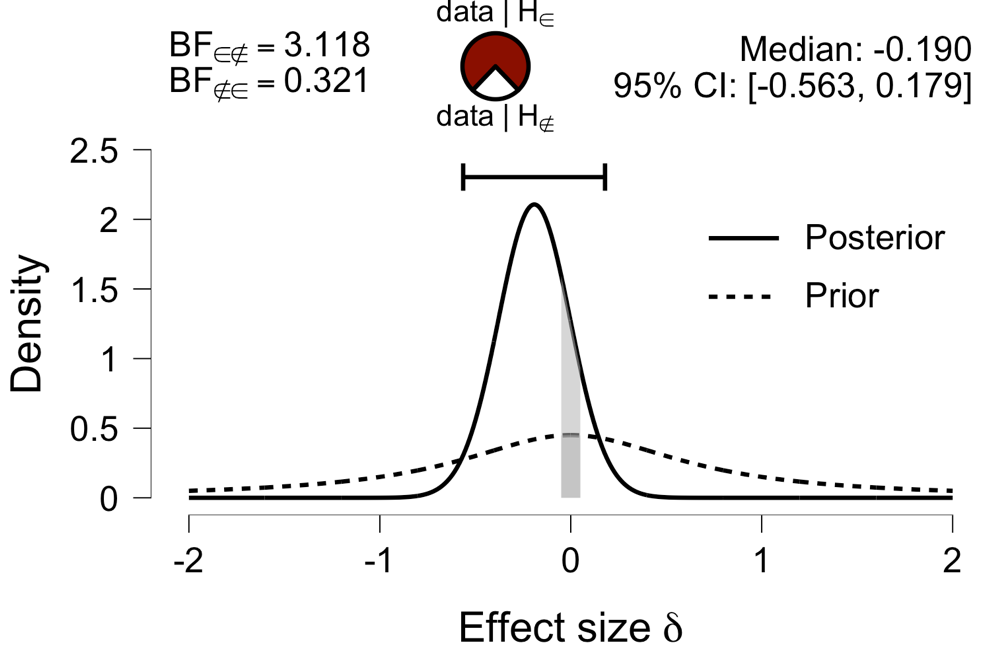 Figure 4. The prior and posterior plot, where the grey area is the specified equivalence region.

We have briefly explained the new equivalence test in JASP 0.12. However, throughout our entire analysis, we tested an undirected hypothesis, whereas our initial hypothesis was directed: according to the theory under scrutiny, when primed with their Asian identity Asian-American women were expected to perform better on a math test than a control group. So instead of testing if there is no meaningful difference, regardless of its direction, we could instead like to test whether or not participants in the Asian-identity condition perform better than participants in the control condition. But before we execute this analysis, let’s visualize the data 3: 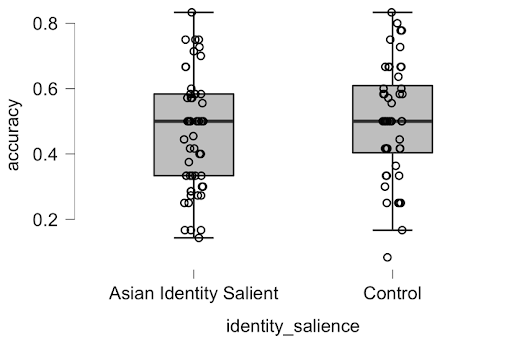 Let’s recapitulate. Previously, we ignored the hypothesized direction of the effect and used the Bayes factor to compare the predictive performance of an interval-null hypothesis,

, either to an undirected alternative hypothesis

, or to an undirected alternative hypothesis

that does not overlap with

. Now we wish to take into account the fact that, if the alternative hypothesis is true, the associated effect sizes are positive only — the test is sharpened. Here we only consider the overlapping hypothesis test, and so we wish to compare the predictive performance of the interval-null hypothesis

against that of the positive-only alternative hypothesis

. In other words, we seek

. Currently, this Bayes factor cannot be obtained directly in the JASP module; however, it can be obtained indirectly, by exploiting the transitive nature of the Bayes factor (see also here). For we have:

On the right-hand side, the first factor we have already computed above as

, and this is easily available in the Equivalence Testing Module; we simply conduct another equivalence test and define the “interval-null” to range from 0 to positive infinity. This analysis (not shown here) produces

over the unrestricted alternative hypothesis

; in turn, we also have weak-to-modest evidence (i.e.,

= 3.205) for the unrestricted alternative hypothesis

over the restricted alternative hypothesis

, which in turn beats

. Hence, by transitivity the Bayes factor for the interval-null

against the directed alternative hypothesis

On a final note, the Bayesian equivalence test has one other elegant property: as the region of equivalence gradually shrinks to a point, the corresponding Bayes factor gracefully reduces to the standard Bayes factor featuring a point-null hypothesis test. In contrast, tight equivalence bounds are problematic for the classical procedure, as the sample size needed to reject non-equivalence quickly becomes unrealistically large.

1 The original study included another condition, but we will only use the Asian-primed and the control condition.

2 We could minimize the impact of rounding errors by increasing the number of displayed decimals via “Preferences” at the left pop-up menu, then to “Results” and adjust under “table options”.

3 We visualized the data with the “Descriptives Statistics” option available in the “Descriptives” menu on the JASP ribbon. After dragging the two variables into the specification boxes, we can select the “Boxplot element” and “Jitter element” under “Boxplots” to produce Figure 5.

Jill de Ron is a Research Master student in Psychology at the University of Amsterdam.

Jill de Ron is a Research Master student in Psychology at the University of Amsterdam.