If there is one thing that caused widespread adoption of Bayesian inference, it’s black-box Markov chain Monte Carlo (MCMC) samplers. Rather than deriving an algorithm to draw samples from a posterior distribution and subsequently implementing it in a programming language, black-box samplers made it possible to specify only the model and have the back-end figure out how to draw MCMC samples from it. From JASP 0.12.0, one of the most well-known black-box samplers, JAGS, is available in JASP as a module!


To demonstrate the JAGS module we use data from the reproducibility project (Open Science Collaboration, 2015) and replicate the analysis done in Wagenmakers et. al., (2017).

For this analysis, there are two variables of interest:

The idea is the following. Each effect is replicable or not replicable.1 We capture this with a variable called clust that is either 1 (replicable) or 0 (not replicable).

The mixture model can be specified in JAGS as follows:

The replication effect of study i is a draw from a normal distribution with a certain mean mu[i] and a precision tau. Here, the ~ specifies that the relation is stochastic.

JAGS uses precision, which is 1 over the variance.
Furthermore, whether the study i is replicable is captured by clust which follows a Bernoulli distribution with unknown probability phi.

Next, we specify the mean mu[i]. We use an arrow <- (or =) because this relation is deterministic.

If clust[i] equals 1, which is determined by equals(clust[i], 1), we have mu[i] <- alpha * original effect[i]. In other words, the study replicates and the replication effect is a function of the original effect. We further multiply this by alpha, some value within [0, 1] to accommodate the fact that effect sizes tend to be overestimated in practice.
If clust[i] equals 0, then we have mu[i] <- 0, specifying that the population mean is 0 for replication effect sizes when a study does not replicate.

That’s all there is to the model! What remains is to choose priors for tau, the precision of the studies, alpha, the slope that accommodates overestimation of effect sizes, and phi, the true effect rate. Here, we use the following three uninformative priors.

Putting it all together we get the following JAGS model:

# Mixture Model Likelihood:
for(i in 1:n) {
#Although JAGS cannot handle variable names with spaces, such as replication
effect, JASP has no problems with this.
replication effect[i] ~ dnorm(mu[i] , tau) # point prediction is mu[i]

Let’s fit the model in JASP! We open the JAGS module (after enabling it from the modules menu by clicking the ‘+’ in the top right of the JASP window). Next, we copy-paste the model code in the text block in the top left. Under “Observed values”, we specify that the sample size is 94. We click once more on the model block and press Ctrl+Enter (or ⌘+Enter on a Mac) to apply the model. That’s all we need to do to fit the model in JASP! Under plots, we select density and trace and get the following output. 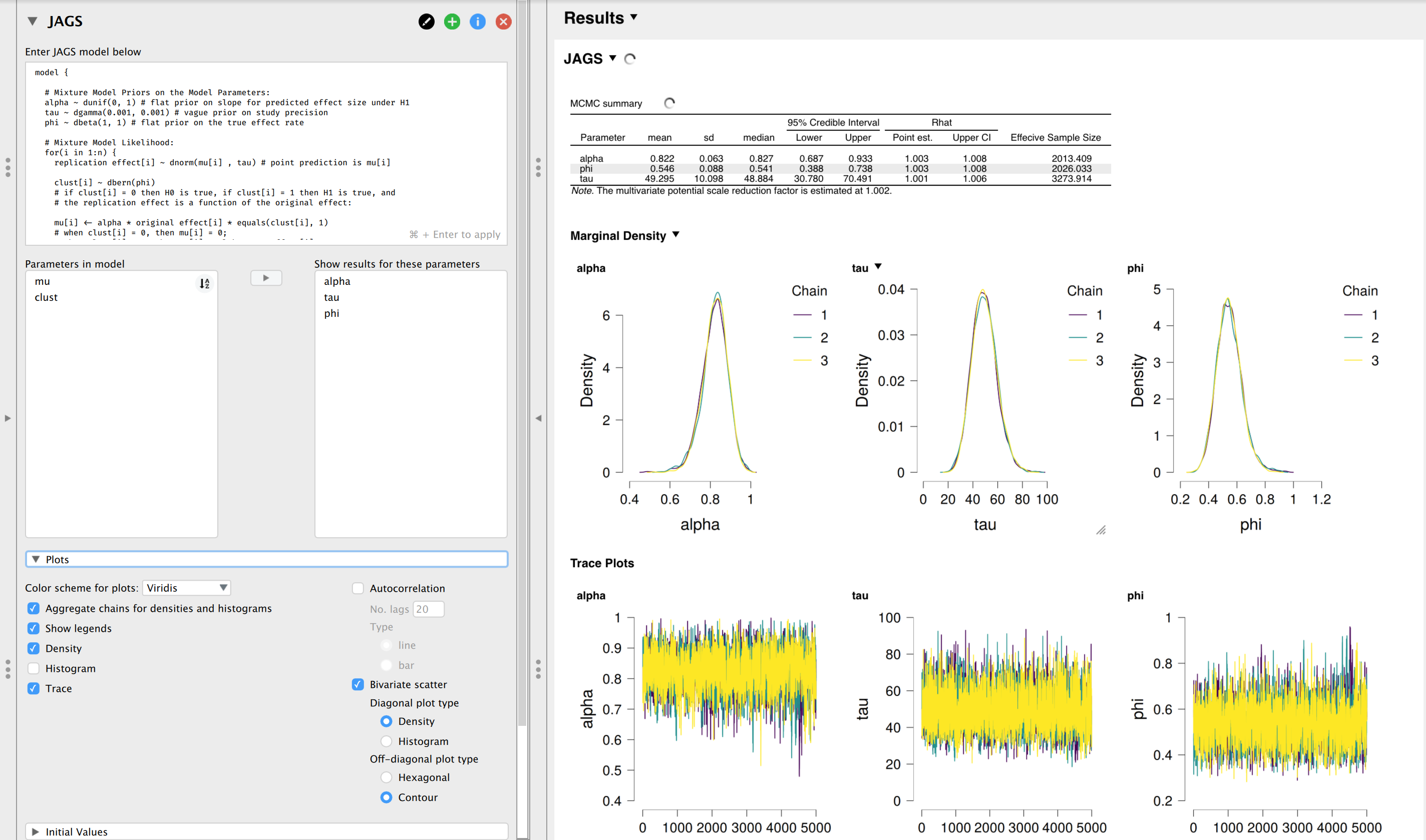 Screenshot of the JAGS module in action.

In the JASP screenshot, the left panel shows the input options and the right panel shows the output. The first table in the output summarizes three posterior distributions by their mean, standard deviation, median, and 95% credible interval. For example, this table tells us that the posterior mean for the probability that a study replicates is 0.54. Furthermore, the table also provides MCMC convergence diagnostics such as Rhat and effective sample size.

Below the table, we see density plots and trace plots. The trace plots confirms that the chains have converged, and the density plots visualize the posterior distribution. Here, we only examine a subset of the joint posterior because in the input options on the left we selected alpha, tau, and phi. Had we also selected mu and clust we would have obtained information about these parameters as well. We did not do so here, because the parameters are vectors and adding them would create 376 additional figures and entries in the table. 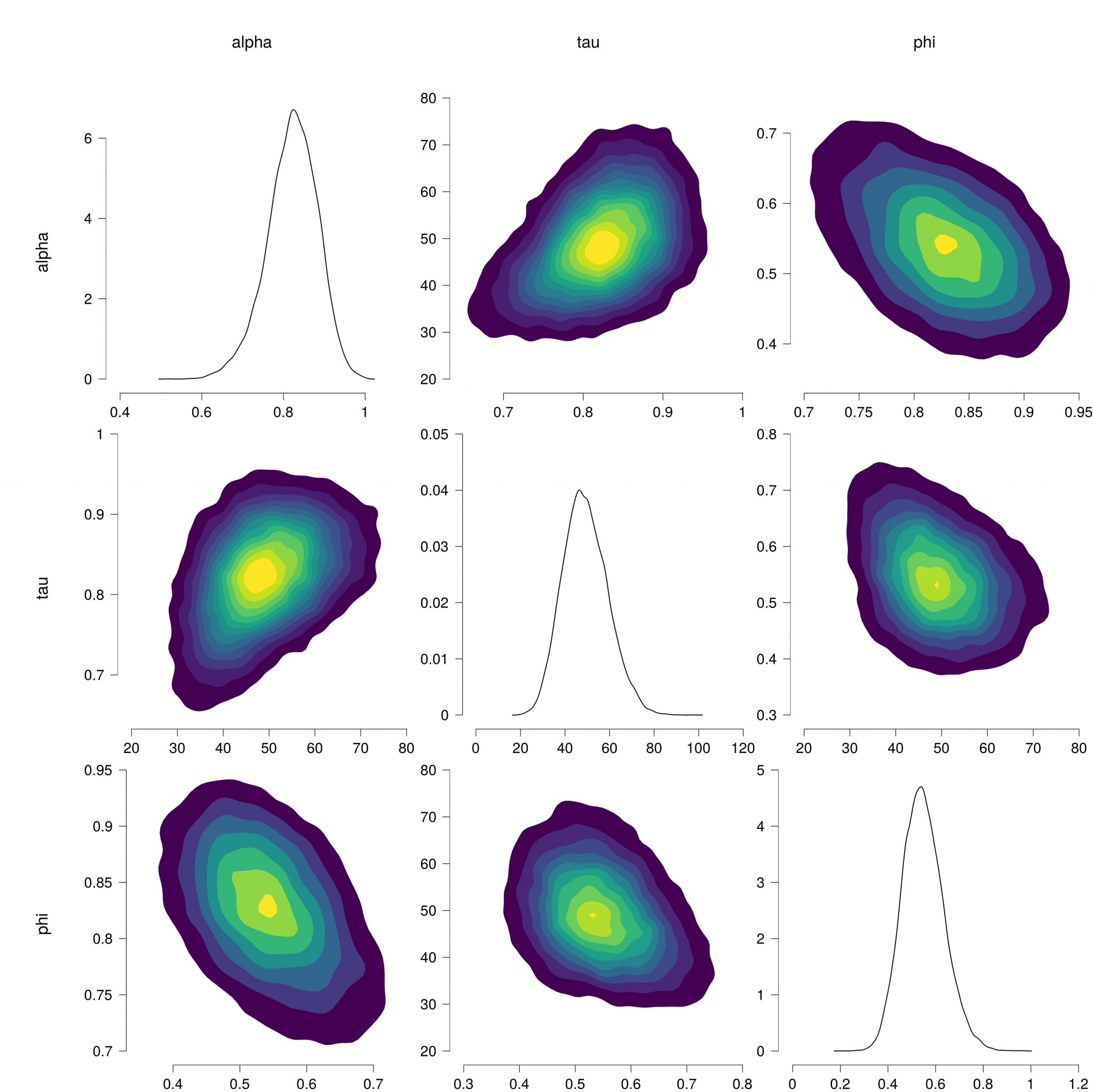 1 Note that we’re not actually testing if a study is replicable or not (that would be impossible). This is merely the interpretation of this mixture model.

We could not have created the JAGS module without the JAGS software itself and the following R packages:

Note that you can obtain these references from JASP by clicking on the title of the analysis in the output window and selecting Copy Citations.