My approach for this review is as a university lecturer in psychology. Ease of learning and use matters since it allows more mental resources for statistical understanding. Also, consistency with the publishing guidelines of the American Psychological Association (APA) matters since that’s how students are supposed to write their reports and papers.

How JASP is better than SPSS

One small click in JASP; a major improvement over SPSS.

Installing JASP is easy and reliable

SPSS requires a campus license which needs to be activated and updated ever so often. In addition, we usually see 3-5 students every year who simply cannot get SPSS working. Students messing up licensing and having install problems cause a lot of wasted time. JASP is free, thus avoiding license problems. I have yet to experience a single student who cannot get JASP running.

Testing assumptions in SPSS is ridiculous

Compare the procedure for testing the normality assumption in a paired samples t-test in JASP and SPSS:

SPSS: Realize that a paired-samples t-test corresponds to a one-sample t-test of the pairwise differences. Then compute that difference using Data → Compute variable… → diff = var2 – var1. Then head to Analyze → Descriptives → Explore → Plots → Normality plots with test and run the analysis on the newly computed “diff” column. Then scroll down through several tables and see if you can find the test of normality. Seriously, why is the Shapiro-Wilk test hidden under “Descriptive statistics” (it’s inferential!) and “Plots” (it’s a table!)? Try motivating students to test assumptions using SPSS. It’s not a pleasant experience. 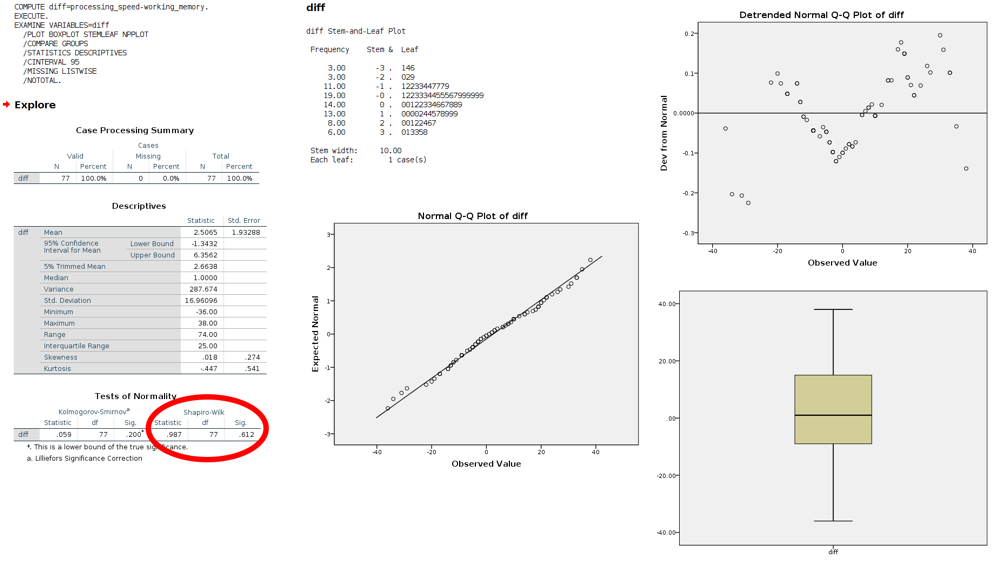 SPSS’ output for normailty tests. It’s so long that I had to split it into three columns and scale it down to fit it into this blog post. There sure is a lot of normality checking going on (and then some), but how much of it is relevant for APA-reporting?

SPSS output is bloated and difficult to convert to APA-style

I usually tell my students that the SPSS pedagogy is the following: We will present the results using the worst possible defaults so that users are forced to deeply understand and tweak everything to not make a fool of themselves. It’s great for spotting students who don’t have a firm understanding of statistics and who uncritically copy-paste the output into their reports! But it is cumbersome to teach, making the students waste attention on figuring out where to find the results rather than understanding the results. And really, it’s not the job of educational software to set up honey traps.

The JASP interface is simpler

It requires substantially fewer clicks to do anything in JASP compared to SPSS. This is important in teaching because the probability that a student gets lost in a demo increases exponentially with the number of steps of the procedure. Notably:

SPSS cannot do meta-analysis. This is Cohen’s d and assumption checks once again: SPSS lacks some basic and often used functions recommended by APA and by pretty much everyone. The upcoming JASP 0.8.4 will feature meta-analysis at a level on par with Cochrane’s widely used RevMan. This will save you the hassle of using a different piece of software for a particular analysis. Furthermore, a look at the JASP source code reveals that more advanced features are in the making, such as meta-regression, trim-and-fill analyses, etc.

Until this point, I have kept my true Bayesian identity in hiding, but the fact that JASP provides Bayesian equivalents to many of the frequentist analyses constitutes a major improvement in science and the teaching of statistical inference. Once you’ve tried explaining research results from a particular study using a confidence interval as compared to a credible interval without the frequent misunderstandings of the former, you know what I mean.

JASP has included ways to set informative priors, but there is room for improvements in the Bayesian analyses, in particular for those more concerned with posterior predictive checks than Bayes Factors as an assessment of model adequacy. Also, posterior distributions of parameter values in regression are not provided yet. Given the current speed of JASP development, I have no doubt that this will come very soon.

JASP is actively developed and responsive to requests

Given the above, SPSS development seems to have halted to a crawl relatively speaking. If SPSS cared for its user base, Cohen’s d would have been included 15 years ago. JASP, on the other hand, is developing at lightning speed and due to its open-source nature, this pace will accelerate once researchers across the world join in on the development. I have presented several ideas to the JASP team on GitHub and many of those were implemented in JASP within 1-2 months.

Where SPSS is (currently) better than JASP

Though SPSS has horrible plotting defaults, the plot options and tweaking options are comprehensive and you can, for the most part, force something nice out of it. JASP only provide a few (nice!) non-editable default plots but nothing else. For example, it cannot make scatterplots. The JASP team is working on a comprehensive solution but have not indicated what it is and when it will arrive.

JASP relies on your spreadsheet editor to do all data editing. While this is a clever solution in many cases (e.g. changing values, computing variables, etc.), it is probably too involved for teaching purposes when converting from wide to long format or from long to wide format. Personally, I hope that most analyses will (also) work on long format, including RM-ANOVA, but probably with an exception for multivariate analyses. JASP has given this issue high priority, but no steps towards a solution have emerged yet.

Doing analyses on subgroups of data can be useful but only SPSS supports this so far, and it would be cumbersome to delete/restore data in Excel, e.g. selecting only Hispanic males.

Install JASP now and use it from this moment and on. Just do it. Keep SPSS hanging around for plotting and perhaps for major restructuring of data for a year or two.

Jonas Kristoffer Lindeløv, ph.d., is an assistant professor at the Centre for Cognitive Neuroscience at Aalborg University. He does research on cognitive improvement in general and following acquired brain injury.